Did you ever have one of those meals that you remember years later? I have had many of those, since I’m so obsessed with food, but the one that I was thinking of recently was the Cream of Tomato Soup that I had on my 40th birthday at Jeanty at Jack’s in San Francisco. Sadly, the restaurant is gone, but it’s big brother, Bistro Jeanty is alive and well in Yountville. And they’ve posted the recipe online! I thought a regular Wednesday night would be a good night to attempt this, because I always think that things will take less time

than they do. If I ever entered one of those cooking competitions on TV, I’d be the one who didn’t plate in time. But, I did it! It was delicious, and beautiful. I varied the recipe a bit because I

didn’t have fresh tomatoes, so I used my old stand-by, the canned San Marzano tomatoes (2 cans) and I only used 2 cups of cream because 4 cups sounded excessive, even to me. The making of the soup is simple. The puff pastry is the tricky part. One thing you shouldn’t skimp on is the cooking of the tomato paste before adding the tomatoes. It really

does help the flavor and adds a nice depth. I also didn’t chill – I just went straight into the bowls and covered with the puff pastry. I like Dufour brand that you can buy at Whole Foods. I thought that these bowls that my mom had would be pretty, but I think that next time I’ll try a bowl with a smaller circumference. I got just barely four rounds out of my sheet of puff pastry, and I had to patch some of them. I served the soup with my Fennel and Apple Salad, inspired by a Jose Andres salad that I ate once at Jaleo in Bethesda. It was a hit! Delicious, and fun to eat too!

Oh, and I almost forgot – here’s a photo from that memorable dinner! 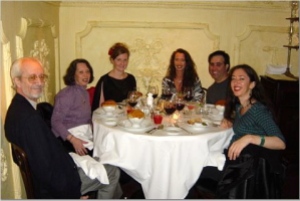 After taking classes at Tante Marie Cooking School in San Francisco, I began teaching classes out of my home, and felt that I had finally found what I was truly passionate about. I love sharing my knowledge with others, and mostly showing people how fun and easy cooking for your family and friends can be!